SACRAMENTO — Leslie Lohse of Glenn has been appointed to the California State Athletic Commission by Gov. Jerry Brown.

The announcement was made today.

She is a member of the California Tribal Business Alliance, and tribal council treasurer of the Paskenta Band of Nomlaki Indians since 1998.

She is a member of Rolling Hills Clinic board of directors and member of Tehama County Girls Inc. She also was chair of the Bureau of Indian Affairs Central California Agency Policy Committee, and Bay Delta Public Advisory Committee, among others. 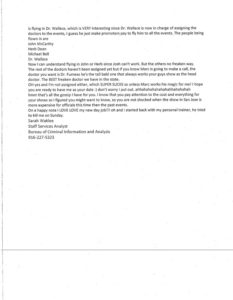 One year ago, Governor Jerry Brown’s office appointed Leslie Lohse, the mother of baseball pitcher Kyle Lohse, to the California State Athletic Commission board. Here was our reaction & background information on the political appointment. Lohse, who was the treasurer of the Paskenta Band of Nomiaki Indians in Tehama County (a couple of hours north of Sacramento), was someone who might have been viewed as an asset to help the Athletic Commission negotiate with tribes running combat sports events without CSAC regulation. In other words, there was an internal belief in some Sacramento circles that she could have helped out with venues like Lemoore (Tachi Palace) in getting CSAC oversight of events back on track.

Lohse also was involved in the debate over online gambling, politicking against New Jersey’s online gambling efforts. Here is a glowing online profile of Lohse.

Instead of being an active player at CSAC meetings, Lohse vanished in a hurry and mysteriously never was brought into the Athletic Commission fold. And now we know why. The reasons are explosive.

The Sacramento Bee reported on Friday that a judge has issued a temporary restraining order against rival, armed factions at the Rolling Hills Casino that Lohse was heavily involved in making a success. Lohse was reportedly suspended as treasurer after being accused by tribal Chairman Andy Freeman of embezzling a lot of money & misusing the Paskenta tribe’s jet. The judge issuing the TRO is apparently on the side of new management. The superintendent of the Bureau of Indian Affairs’ Central California continues to recognize Lohse as the tribe’s treasurer while the mediation process between the two rival factions takes place.

The story of the armed stand-off between the two tribal factions has been heavily covered in the Red Bluff, Redding, I-5 area of Northern California. The situation is disastrous and comes on the heels of the violence in Modoc County, the state’s sparsely-populated Northeastern county. Here’s Courthouse News:

The General Council elected four new members to replace those who left. The Tribal Council is now led by Andy Freeman, who secured the casino with hired, armed security, according to the Observer.

The four ousted members maintain that they are the duly elected Tribal Council of the Paskenta Band and have established their own Tribal Court and Tribal Police Department.

It’s no wonder that Lohse never showed up for the Athletic Commission. And it’s a demonstration of the kind of politicking in Sacramento that has created a chaotic regulatory climate in the state for combat sports. Nobody knows what the hell is going on.

Three former officials of the tribe that owns the Rolling Hills Casino in Corning were indicted Thursday on charges they embezzled at least $6 million from the tribal coffers and used the money to purchase cars, international junkets, gold coins and landscaping for their homes with such features as koi ponds and a putting green.

The 69-count indictment by a federal grand jury in Sacramento alleges that John Crosby, the tribe’s onetime economic development director; Ines Crosby, his mother and the former tribal administrator; and Leslie Lohse, Ines Crosby’s sister and the former tribal treasurer, engaged in a sweeping conspiracy to loot the tribal bank accounts, then lied to FBI agents investigating the matter.

The indictment follows years of controversy involving the tribal government and the casino. Warring factions in the tribe at various times engaged in an armed standoff outside the casino, went to court over control of the casino and endured a cyberattack that destroyed computer records – one that the indictment blames on the three defendants.

The dispute also included a lawsuit claiming wrongdoing under the federal Racketeer Influenced and Corrupt Organization Act that named the defendants and more than a dozen others.