How can John Frierson still be on Commission.  So sad to look at him in this meeting he is mentally not there. He should by law be termed out. John Carvelli had to direct him where the Flag is. He is clueless.

How was John Frierson allowed to be on CSAC since 2001. Over 15 years on commission and by law he should be allowed only 4 years. Frierson said at one CSAC meeting that he only got on CSAC to get a Black Man as a inspector and that was Larry Irvin. This CSAC inspector required promoters to let him know who the winners and losers were before the fights began at early MMA fights.

Everyone understands the seriousness of the debt crisis in California and the position that the California Democratic Party is in. Because California is a one-party political state, a lot of power is consolidated in certain geographic areas – most of it in the big cities west of I-5. John Frierson happens to be a very old-school player in California Democratic Party circles. Frierson has been a member of the CSAC since 2001. To understand how uncommon the length of Frierson’s tenure on the Commission is, you have to look at the rules for membership appointment. You can be appointed to the CSAC via one of three avenues – 1) by the Governor, 2) by the Assembly Speaker, or 3) by the Senate Rules Committee.

The reason we point this out for your consideration is because in order for Chairman Frierson to be kept on the CSAC board for as long as he has been, he must be someone of substantial political value. Given his 40+ year political relationship with Governor Jerry Brown, it’s easy to see why John Frierson will remain Chairman of the CSAC for years to come. Although his term expires on January 1st, 2015, the safe bet is that Chairman Frierson will stick around as long as he is in good health. 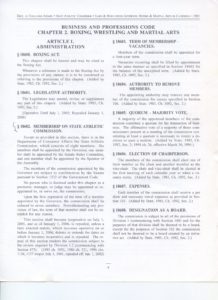 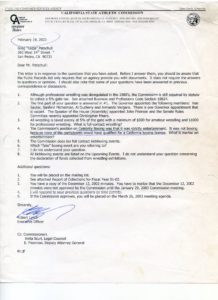 Notice the brother in-law Gordon Sauter was on this CSAC commission in 2003 that held back MMA for the UFC to get full control in 2006 even thought the sport was approved in 2000 and went through the OAL for approval. He now is appointed again by Brother in Law Governor Jerry Brown.

WHY DOESN’T THE ABC ENFORCE THERE CONSTITUTION? IS IT BECAUSE ANDY FOSTER CAN COLLECT EXTRA PAYOFF FUNDS BY TAXING MMA FIGHTERS FOR BOXERS PENSION FUND. THEY WILL NEVER RECEIVE THESE FUNDS BECAUSE CSAC STEALS MONEY FROM PENSION FUND AND NEUROLOGICAL FUNDS. ABC SHOULD DO THERE JOB AND INVESTIGATE THIS CORRUPT CSAC AND ALL OTHER CORRUPT ATHLETIC COMMISSION. LOOK AT THIS CONSTITUTION THAT THEY WILL NOT ENFORCE. WHY HAVE A ABC IF THEY WON’T DO THEIR JOB TP TRULY PROTECT FIGHTERS.

THIS IS THERE CONSTITUTION CLAIMING ALL COMMISSIONS NEED TO STICK TOGETHER AND ENFORCE ALL SUSPENSIONS. BUT CORRUPT CSAC CAN DO WHAT EVER THEY WANT. IS THE ABC IN ON THE TAKE FROM STOLEN NEUROLOGICAL/PENSION FUND MONEY COLLECTED? 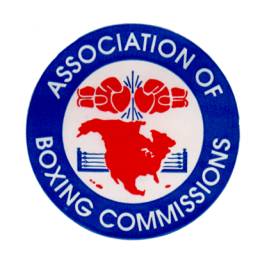 CSAC IN ETHICS VIOLATION PROOF! THIS ABC IS A JOKE AS MUCH AS THE CSAC IS.

An ABC member shall at all times:

(A) Adhere to the principles and guidelines of the ABC;

(B) Display actions that are a credit to combat sports;

(D) Uphold and enforce all suspensions and revocations at all times.

LOOK AT D THE CSAC IS IN VIOLATION OF ETHICS. WHY DOES ABC ALLOW THIS CORRUPTION TO CONTINUE?

WATCH CSAC 2016 MEETING ABOVE. WITNESS WHAT CSAC SAYS ABOUT McCARTY BILL 2007. THEY ARE A JOKE. CSAC ALLOWS KIDS AND ADULTS TO STRIKE THE HEAD AND IT IS CONSIDERED LIGHT CONTACT NO DOCTOR OR AMBULANCE NEEDED. BUT IF A MARTIAL ART KNOWN AS PANKRATION DOESN’T STRIKE THE HEAD IT IS FULL CONTACT AND DOCTOR AND AMBULANCE NEEDED. THIS CSAC IS BRAIN DEAD. ALSO LOOK AT AMATEUR MMA. THEY STRIKE THE HEAD JUST AS HARD AS THE PRO FIGHTERS BUT NO BRAIN SCANS FOR THEM REQUIRED. PLUS THIS CSAC HAS NOT SCANNED ANYONE SINCE 1998 AND STILL COLLECT TAX FOR IT. THIS NEUROLOGICAL FUND IS ONLY FOR THEM TO STEAL AND KEEP THEIR CORRUPT ORGANIZATION  AFLOAT.

THIS McCARTY’S BILL WILL BE USELESS FOR KIDS MARTIAL ARTS IN CALIFORNIA. CSAC RULES MARTIAL ARTS THAT STRIKE THE HEAD AND YOU CAN WIN BY KNOCKOUT WHERE CONCUSSIONS AND DEATHS MAY OCCUR NEEDS NO REGULATION OR SCANS. BUT IF YOU DON’T STRIKE THE HEAD WHERE NO CONCUSSION CAN OCCUR IT IS FULL CONTACT AND STRICT REGULATION IS NEEDED. BACKWARDS AND CLUELESS IN CALIFORNIA. CLUELESS AT THE CSAC/DCA.