Watch April CSAC meeting on Page Below and notice CSAC scrambling now to pay pension only after I discovered money missing from neurological fund in e-mail. They don’t even put it directly in the Pension account which they never touch. CSAC has a new secret account they put it into to run daily operations. (Andy Foster admits in video). I have been battling this Boxers Pension Fund issue since 1998. Started again when I was Sgt at Arms at ILWU Hall and ex Boxers were telling me they haven’t got there pension. I gave them the number to call 1-916 263-2195. They called and said when they called the CSAC staff member said the money was lost, stolen or misplaced, good luck.

This CSAC is just waiting for all the Boxers to pass so they will never have to pay out funds.

I don’t buy for a second that CSAC/DCA could withstand a forensic audit of the boxers pension/neurological fund, especially given what has happened with the Parks & Recreations Fund scandal that blew up in Governor Jerry Brown’s face. With California having over 500 special funds and politicians having so much cash at their disposal, abuse & fraud is ripe.

Since 2000 I have been battling the CSAC for Boxers Pension. Now all of a sudden they want to start paying it out. Also was battling them doing fixed MMA fights and extortion from Jiu Jitsu tournaments. Read this Proof: 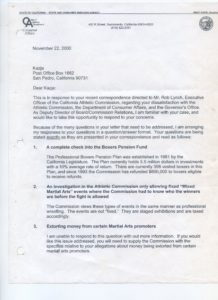 Hopefully this happens. But will it mean more money to steal from fighters by government instead of shady promoters. 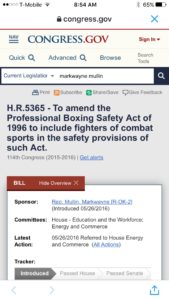 READ THIS NEWS ABOUT ALI ACT !

ALL OF A SUDDEN MY COMPLAINTS AND INVESTIGATIONS INTO BOXER PENSION FUND THE DCA/CSAC FINALLY PUTS OUT NEWS RELEASE ON MAY 17, 2016. THEY SHOULD PUT OUT A MILLION DOLLARS IN ADVERTISEMENT BECAUSE HALF OF THE BOXERS DIED SINCE PENSION STARTED. THEY DID THIS PRESS RELEASE IN THE PAST, ONLY ON THE CSAC WEBSITE. HOW MANY OLD TIME BOXERS ARE COMPUTER LITERATE AND SPEAK ENGLISH ? WHEN THE BOXERS WOULD CALL THE CSAC STAFF WOULD TELL THEM THE MONEY WAS LOST,STOLEN OR MISPLACED. PROBABLY BECAUSE THE STAFF  GHOST WORKERS WERE GETTING PAID FROM THE BOXERS PENSION FUND.

IMAGINE IF I WASN’T AROUND TO KEEP THIS CORRUPT CSAC IN CHECK. MAYBE SOMEDAY I CAN GET A STRAIGHT ANSWER ON LIGHT CONTACT PANKRATION FROM DCA/CSAC.

A FIGHTER SHOULDN’T HAVE TO FIGHT TO SQUEEZE MONEY OUT FROM PENSION FUND. IMAGINE HOW MANY JUST GIVE UP ON TRYING TO GET THERE RIGHTLY OWNED MONEY FROM CSAC. IT IS WRONG HOW THIS MONEY IS BEING HANDLED. THIS STORY CAME OUT IN 2013. WHAT HAS SLY ANDY FOSTER BEEN DOING WITH THE PENSION MONEY SINCE THEN? WHY DOES CSAC TELL BOXERS THAT THE MONEY IS LOST STOLEN OR MISPLACED. THIS BOXER HAD TO GET THE PRESS AND MEDIA TO GET HIS MONEY IN 2013.

SACRAMENTO (CBS13) — A famous boxer from Sacramento tried to get his pension from the state.
But when he couldn’t get straight answers, he called Kurtis.
He’s Tony “The Tiger” Lopez, a three-time world championship fighter.
California has a pension fund for boxers but Tony thinks he’s being shorted.
“This was my first title fight with Rocky Lockridge, fight of the year,” said Tony Lopez, three-time world championship boxer.
Tony was just 25 years old when he won his first world championship title.
Now a decorated and retired fighter at age 50, he’s qualified to collect his pension.
Back in 1982, California started the pension fund for boxers who fought at least 75 professional rounds in the state.
But Tony recently found out his pension amount, about $34,000, was only a bit more than his brother’s, Sal Lopez.
But Tony says after the pension program started, he fought three times as many fights as Sal.
“How am I only getting $2,000 more than my brother? Oh well we don’t know how they calculate it. Well, however they calculate it, it’s not right,” said Tony.
We asked the commissioner of the California Athletic Commission, which oversees this fund, why the numbers didn’t seem to add up, and he initially wasn’t sure how the pension fund was calculated either.
“It’s a very complicated formula,” said Andy Foster, Executive Officer, California Athletic Commission.
We then contacted San Diego law professor, Bob Fellmeth, who wrote the law for this pension fund.
He told us the number of rounds fought did make a difference.
So we went back to the Commission, they found a provision in the law, allowing Tony’s brother’s 21 fights before the pension program started, to count.
“Once you count those fights, it brought the number of bouts to a very even number,” said Foster.
Which is why their pensions are about the same.
Tony has since received his pension check in full and is glad to finally get answers.
“I’m a three time world champion because I don’t quit. I never said I was the best fighter in the world but I tell you what, I don’t quit,” said Tony.
Since 1996, this pension program has been funded soley from ticket sales.
Right now, California is the only state that has a boxers pension fund.
There is $5.3 million currently in the fund. But the Commission tells us they can’t find more than 150 boxers who are entitled to share roughly $2 million. So they want to get the word out about this pension available.

Boxers have three years to claim their benefit before the Commission is required to forfeit. The Commission should do everything it can to reach out and contact boxers and pay their benefits before they are forfeited. The Commission may want to consider utilizing the Social Security Administration and the Internal Revenue Service features that are available to locate individuals that are due a retirement benefit. For example, a boxer becomes eligible at age 50 to receive their retirement distribution and the Commission must forfeit their benefit at age 53. If the commission does not hear from the boxer by age 52, the Commission could utilize the services stated above to help locate the boxer. As a result, the Commission would reduce the likelihood that a significant number of boxers will re-claim their forfeited accounts to the detriment of current year contributions and allocations. The Commission may want to consider other funding mechanisms to further mitigate the risk of current year contributions not being sufficient to cover lost beneficiary claims in any given year.